The Guardian has undertaken a 5 month undercover investigation of the British poultry industry – it’s damning. We need to think about what we’re putting into our mouths as obviously government, regulators and food producers are failing us. 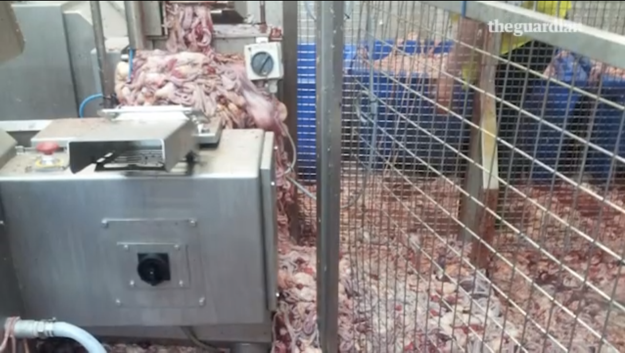 The Guardian’s investigation uncovered a catalogue of alleged hygiene failings in the poultry industry, prompting three leading supermarkets – Tesco, Sainsbury’s and Marks & Spencer – to launch their own investigations on Wednesday. Undercover footage, photographic evidence and information from whistleblowers has revealed how strict industry hygiene standards to prevent the contamination of chicken with potentially deadly campylobacter bacteria can be flouted on the factory floor and on farms.

At the last count, campylobacter was present in two-thirds of British fresh chicken sold in the UK. Although the bug is killed by thorough cooking, around 280,000 people a year in the UK are made ill by it, and it is thought that 100 people die. Contamination rates are known to have increased in the past decade.